This Band-tailed Pigeon (also known as a wood pigeon) came to WildCare with an injured shoulder. He was rescued in Novato and brought to WildCare on January 7.

Our veterinarian, Dr. Sorem, examined the bird and found that, although the soft tissue damage to the wing was significant, the underlying tendons and muscles were intact. She closed the wound with the bird under anesthesia, and placed him on pain medications and a course of antibiotics.

Over the next weeks the injury healed well, but our team grew increasingly concerned about this Band-tail because he wouldn’t eat! The team gave him three-times-daily tube feedings, and tempted him with many of the foods Band-tailed Pigeons like to eat, but his weight continued to drop.

But then, we offered him seasonal berries from the pyracantha bush and the privet!

That was the secret! The diet of the Band-tailed Pigeon shifts with the season. Acorns are a favorite food, as are nuts and seeds. And berries! Apparently this is the time when these birds eat berries… our pigeon patient only started eating (and eating voraciously!) when we offered him a selection of natural, seasonal fruit.

With this pigeon’s food preference firmly established, we will continue to offer as many berries as he will eat until he is healthy enough to return to the wild.

What is a Band-tailed Pigeon?

Band-tailed Pigeons (also called Band-tails) are members of the Columbidae family. Also called wood pigeons and wild pigeons, they are sometimes confused with Rock Pigeons (the familiar city pigeon) because of their similarity in size and posture, but generally the range of the two species does not overlap.

Band-tailed Pigeons are forested area perching birds while Rock Pigeons have adapted to life with people. Distinctive characteristics of Band-tails (compared to feral Rock Pigeons) are their black-tipped yellow bills, and yellow legs and feet (click to watch a video of Band-tails in the wild.)

Another major difference is their temperament. For whatever reason, Band-tailed Pigeons are terrified in captivity and are as psychologically fragile as rabbits or deer or crows. All of these species require careful treatment in rehabilitation because they can easily die from fear alone. Perhaps there is a good reason for this. These are all species that have been heavily hunted or persecuted by people, and only the most fearful and cautious have survived.

Hunted almost to extinction in the early 20th century, the West Coast Band-tail population has slowly been increasing in the last decade, in response to hunting closures and restrictions coupled with habitat rehabilitation and regrowth.

Hunting is now allowed only when populations are above a certain “threshold” level, and even then only in a very limited season with a very modest limit. 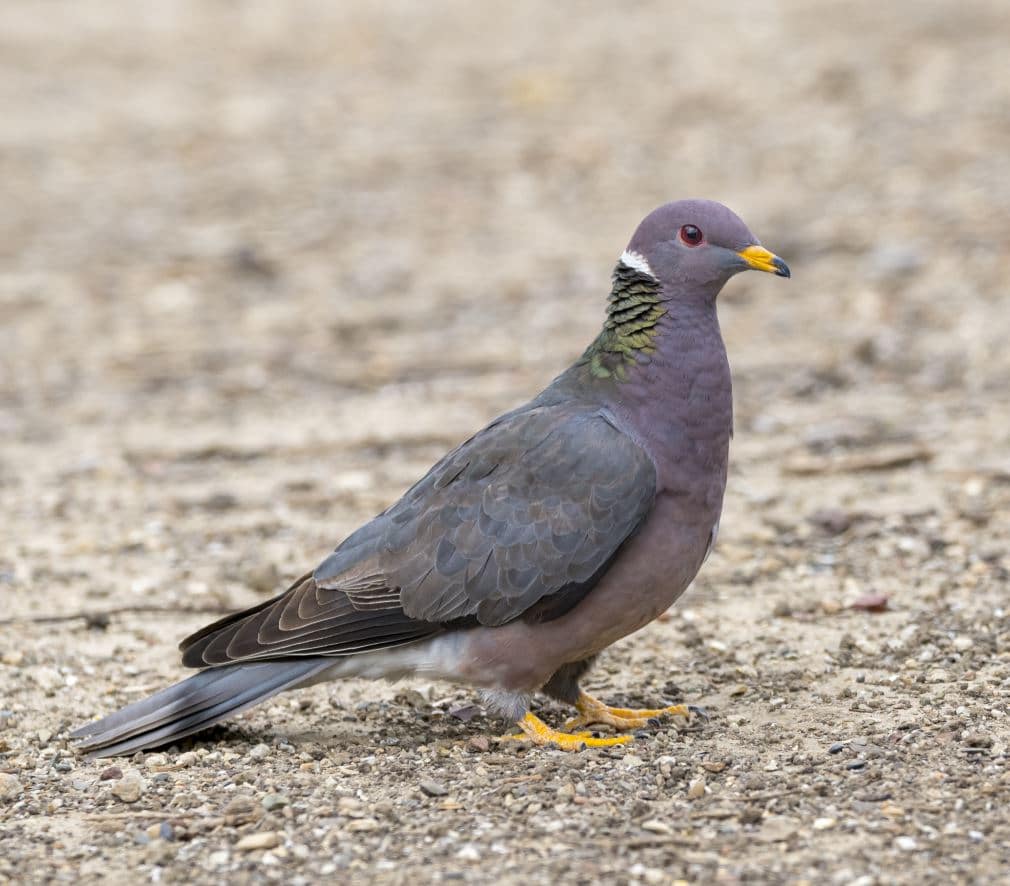 lete population total is unknown, but two basic types of surveys have been conducted annually that form a trend analysis of population changes.

These involve breeding bird “calling” counts along prescribed fixed routes during the peak of breeding, and more recently, with counts at known mineral springs.

In one Oregon study, most nesting occurred within 16 miles of mineral springs. Band-tails’ diet consists of nuts (called “hard mast”), such as acorns, as well as grain, buds and fruits.

During nesting, they rely on “soft mast” such as native berries like elderberry, bitter cherry, serviceberry, huckleberry, bunchberry, hawthorn and buckthorn as they ripen. This soft mast is deficient in essential minerals, especially calcium, which is required to make egg shells and in the development of bone and tissue in the young, called squabs.

Band-tailed Pigeons gather at mineral springs to drink the waters before returning to their nests, where the solution is processed in glands found along the throat. Once in the parent bird’s crop (a sack-like structure in the throat where food is stored) it is made available to the squabs in the form of a curd-like “pigeon milk,” a mixture of soft mast and water.

Adult birds may return to the mineral springs two or three times a week, both parents taking turns traveling and brooding the squab.

Band-tailed Pigeons are monogamous, and the pair bond may last a lifetime.

Although the risks to Band-tailed Pigeons from hunting have decreased (they are now considered a species of “least concern”), their population continues to decrease, mostly due to habitat loss. Another risk to these birds is the highly contagious protozoan, Trichomonas gallinae, which is commonly found in pigeons, turkeys, chickens, hawks and Mourning Doves.

Like salmonellosis, which is caused by the Salmonella bacteria and is deadly to songbirds (click to learn about the current outbreak of salmonellosis in the San Francisco Bay Area), trichomoniasis can be transferred between birds at bird feeders.

You can protect the birds in your neighborhood by cleaning and bleaching your bird feeders at least weekly (and removing them entirely when there is an outbreak of disease, as there is now). Or instead of using bird feeders, attract birds to your yard with native plants! Learn more at the UC Marin Master Gardeners’ website!

Special thanks to JoLynn Taylor for the content of this story!