Badly damaged flight feathers are a death sentence for bird like this Great Horned Owl. If he couldn't fly or hunt, this owl would starve.

The bird was brought to our sister center, Sonoma County Wildlife Rescue (SCWR), 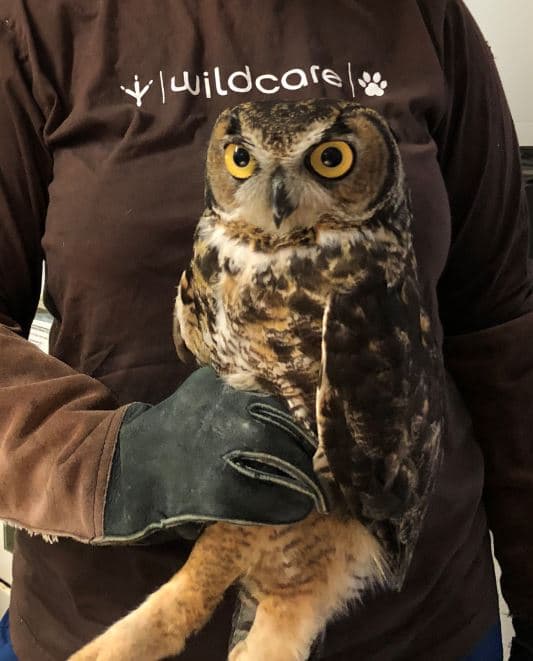 after being found on the ground. Although feisty and aggressive, the bird had an injured wing, and damage to his feathers that, despite staff's efforts, only got worse during his time in care.

The wonderful staff at SCWR healed the owl's injuries, but nothing a medical team can do will cause an owl to regrow damaged feathers.

Great Horned Owls molt once a year, usually after their young have fledged and the demands on their resources are lower. Flight feathers usually molt one at a time, with healthy feathers regrowing to replace tattered or broken ones. It's a slow process, however, and keeping this aggressive and active bird in an aviary until the feathers could regrow was simply not an option.

Fortunately, WildCare's Veterinarian Dr. Juliana Sorem, and our Wildlife Technician Jacqueline Lewis have learned the specialized skill of feather imping, a process that replaces damaged feathers on a live bird with healthy feathers from a deceased one. SCWR transferred the bird to WildCare for the procedure.

"Imping" (short for implantation) is a skill that comes from falconry and dates back hundreds of years. Feathers from a deceased bird are trimmed and attached to the carefully-prepared feather shafts of a living bird with epoxy. In practice, the process is something like getting hair extensions or fake nails, but, unlike with a manicure, the bird's survival relies on the feathers functioning as well as the originals. Doing an imping procedure right is a painstaking and time-consuming process.

First, suitable replacement feathers have to be found. WildCare admits 10 - 20 Great Horned Owl patients every year, and when an adult bird doesn't survive his or her injuries and dies in care, Medical Staff will often harvest the feathers for just such a situation. (This is true of many raptor species— imping works on hawks too!) We had recently lost a hit-by-car Great Horned Owl patient who had beautiful feathers. That bird became the donor to help this one.

Most of this owl's flight feathers were damaged and needed replacement, so the procedure was going to take a couple of hours. As with all of WildCare's patients, Great Horned Owls are high-stress, and keeping the bird restrained during the procedure wasn't possible without anesthesia. Dr. Sorem intubated the bird, and she and Jacqueline monitored the owl's breathing and heartbeat throughout the procedure.

The donor feathers are carefully catalogued in their proper order (see photo above), and starting on one wing, the team carefully trims the damaged feather away, leaving just the feather shaft which is embedded in the bone of the wing. The donor feather is also trimmed, and a thin piece of light wood is inserted into the shaft to serve as a splint between the old feather shaft and the new feather.

After carefully placing wax paper over the other feathers to protect them from any contact with the epoxy, the epoxy-tipped end of the donor feather and shaft is inserted into the existing shaft and held to allow the epoxy to set.This process is repeated for all the feathers.

Because of the risks of long-term anesthesia, Dr. Sorem and Jacqueline decided to do one wing one day, and then wait for a couple of days to allow the bird to rest and recover before imping the other wing.

The procedure (as you can see in the time-lapse video above was a great success! Below is a short clip of the owl's wing with the new feathers in place.

After a week under observation at WildCare, the owl was transferred back to SCWR where they have the perfect aviaries for an owl to rebuild his strength and try out his new feathers.

The video below, taken by SCWR staff, show's the owl's very first flight attempt with his new feathers. Although the flight is low, you can see that the bird has good lift and excellent control of his wings. He's still weak from his convalescence (flying is hard work and takes a lot of strength!) but with a couple of weeks of strength-building, he will be released back to the wild very soon!

And what will happen with the imped feathers? He'll shed them during his molt, just as he would have done with his natural feathers. This owl should be able to live a full and healthy life in the wild.