WildCare supporter Eileen sent this wonderful video of coyote pups playing on her back deck. Mom, dad and the
entire extended coyote family work hard to raise healthy pups like these!

Click here to sponsor a group of baby animals in WildCare’s Wildlife Hospital in honor of Dad.

Then send him an eCard to let him know you’ve made a gift to help baby wildlife in his name!

All the wonderful human dads in our lives may be surprised to hear that they have some competition for the title “Best Dad” among our wild neighbors.

Since mammal mothers have mammary glands that provide nourishment for the young, mammal fathers aren’t as necessary as food providers. But there are exceptions.

Aside from some primate fathers (like ours) and those of a few other species, the canines win paws-down. Fox, coyote and wolf fathers all play a major role in canine family life.

Coyotes and wolves live in extended family packs, and the whole family helps feed, protect and babysit the new pups. The WildCare supporter Eileen who filmed the coyote pups on her back deck (above) says she’s seen the parent coyotes sunning themselves down the garden, and this healthy brood of playful young coyotes is a testament to the hard work of  mom, dad, and the whole family.

Gray Foxes live in a nuclear family of just parents and young, and the father hunts and brings food to his mate while the pups are nursing. Later he’ll bring food and prey to the young and teach them to hunt for themselves. Fox fathers have also been observed engaging in lively games with their pups.

WildCare supporter Danielle sent us these special moments with
the Gray Fox family that shares her backyard.

The young of precocial species of birds, like turkeys, ducks and chickens, whose youngsters are able to walk and eat solid foods soon after hatching are comparatively easy to raise. The little ones only need to watch mom and start pecking or dabbling. But for the altricial species of birds, songbirds, raptors and others, raising baby birds is so labor-intensive that both parents have to work. Baby birds need to be fed nearly continuously from dawn to dark (or from dusk to dawn for nocturnal birds), and different species use different tactics.

Some bird parents share just about all their duties evenly. Others share some chores, and divide up the others. According to some researchers, orphaned male songbirds may be at a disadvantage in the mating game if dad isn’t around to teach them their love songs. 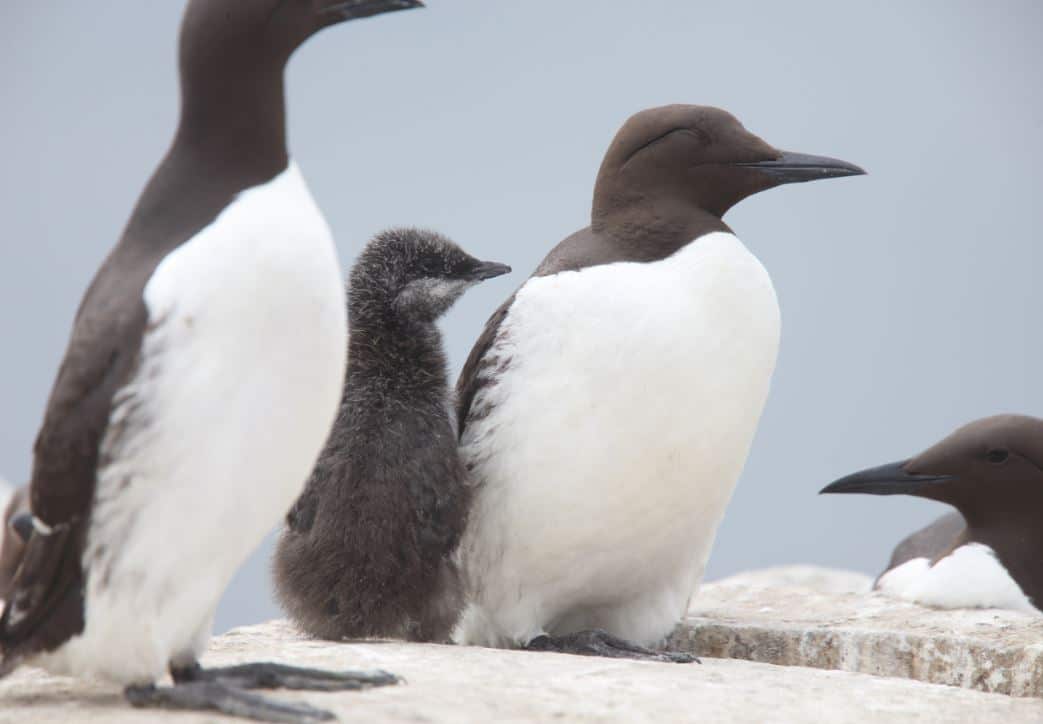 Most raptor parents divvy up the responsibilities of raising their young, with the female doing most of the incubating and the male doing most of the hunting. Barn Owl fathers hunt all night to bring back gophers and other rodents for their growing owlets, which the mother owl rips into pieces to feed their babies.

Common Murre parents, like most seabirds, also share the responsibility of caring for their young. Murre fathers are especially dedicated, however, as they stay with their chick for as long as a month to teach the baby the survival skills he’ll need.

When it is time for the chick to leave the rocky cliffs on which murres nest, dad will call to his chick, encouraging the flightless, three week old baby to plunge into the water below.

Once a chick leaves the nesting cliff, the father stays with the chick for three or four weeks. He does all the fishing, diving to hunt for food while the chick stays floating on the surface. When the murre father reemerges with fish for them both to eat, dad and baby will reunite by calling to each other .

You certainly don’t have to be the biological father of a baby to be a wonderful dad! WildCare’s Wildlife Ambassador American Kestrel Kele is a testament to that. 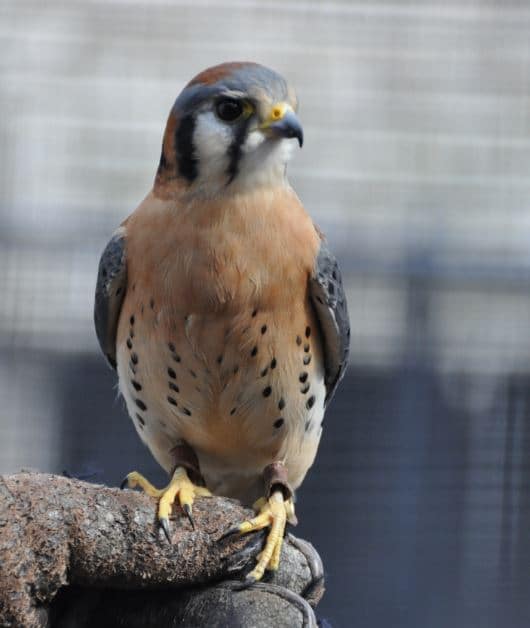 If he had been a wild kestrel, Kele would have done the majority of hunting to feed his mate and their chicks. Kestrel dads work hard!

But Kele seems to have been raised as a pet– he came to WildCare after landing at a family’s picnic and attempting to steal food from their hands. Based on his behavior, we suspect he was taken from the wild as a baby and reared by humans who then released him, assuming he would know how to hunt on his own. He apparently wasn’t able to successfully hunt, and he was emaciated and dehydrated upon intake to WildCare. Kele now lives in our Courtyard as one of our educational animals.

When we admitted a baby kestrel to the Wildlife Hospital, our first thought was to get the baby a foster parent. Kestrels are high stress patients, and difficult to raise. We didn’t know if Kele would have the instincts of a wild father kestrel to care for a chick, but we thought we’d give him the chance. After an introductory period, we placed the chick and a camera into a carrier and gave Kele plenty of food to potentially bring to the baby.

We were incredibly gratified to see that Kele is a WONDERFUL dad! Watch him gently care for the chick in the video below, and appreciate how much this funny wobbly baby benefited from Kele’s care! Kele has helped successfully rear three kestrel chicks, demonstrating what an excellent dad he is to chicks of all ages.

WildCare wishes dads of ALL types and all species a very happy Father’s Day!

Watch Kele the American Kestrel show off his parenting skills with a foster chick in the Wildlife Hospital.

How your sponsorship helps WildCare’s babies:

$25 could purchase a heating pad (to substitute for a mother’s warmth) that will see several groups of orphaned wild babies through their first months of care.

$50 could provide nearly a week’s worth of fruits and vegetables full of necessary nutrients to help your babies grow up strong and healthy.

$100 could buy a good gram scale that will help our babies’ foster care providers quickly determine if a problem is developing.

$250 could help purchase a brooder box or an incubator to keep babies warm and safe when they are at their smallest.

$500 could pay for enclosures, fencing or caging to give babies the space they need to learn survival skills and build strength for release.