Help Stop the Use of Glue Traps

In July of 2022, WildCare's Alison Hermance gave a presentation about the horrors of glue traps to the San Francisco Commission of Animal Control and Welfare (soon to be renamed the Animal Commission).

WildCare's goal has always been to stop the use of these incredibly inhumane devices by raising public awareness, and working to get them banned in San Francisco, Marin and ultimately California and beyond.

The video below shows Alison's presentation to the Commission and the discussion afterward about potentially presenting a ban on glue traps to the San Francisco Board of Supervisors. 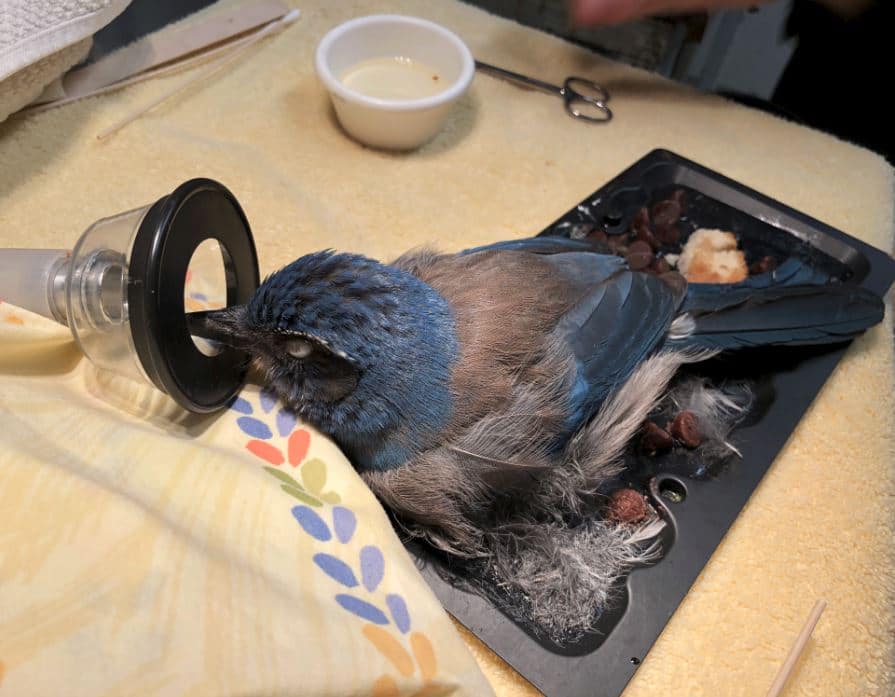 This Western Scrub Jay probably thought he'd hit the jackpot when he saw a black tray full of bread and chocolate chips in the yard. What a treat! As corvids do, he probably hopped down for a closer look, cocked his head, and then hopped a bit closer. 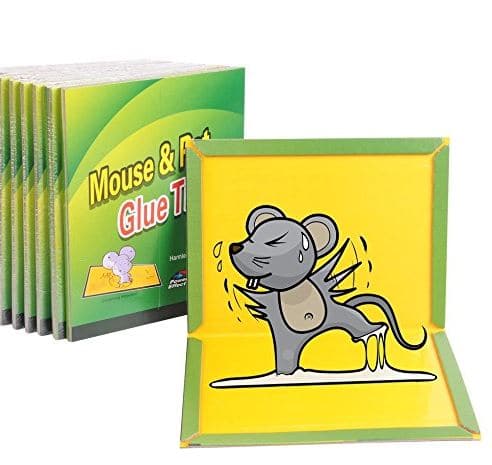 Glue trap packaging features cute graphics and a "safe and nontoxic" message. But we know what really happens when an animal touches a glue trap!

The trouble didn't start until he actually stepped onto the black tray. Suddenly his feet were stuck! Some panicked flapping, and his tail was caught too! Very quickly the bird's entire body was stuck to the incredibly sticky adhesive. He was in real trouble.

Glue traps may sound like a good idea. Advertising for these products implies that they are clean, non-toxic and effective. Many products feature cute cartoons of stuck rodents. The manufacturers imply that all you have to do is uncover the sticky plate, put it where mice and rats have been seen and somehow the problem is solved. People don't think about what happens next.

What happens next is horrific.

The glue trap doesn’t instantly kill the animal — the glue is not toxic. Instead, the animal stays stuck, dying over the course of several days from starvation, dehydration and suffocation.

WildCare admits a dozen or more animals stuck to glue traps every year, and each one is heartbreaking. Animals stuck to glue traps will rip off their own skin and fur trying to escape. They will even chew off their own limbs in a desperate attempt to get away. They inflict terrible injuries on themselves, even fracturing limbs, trying to get free. Trapped animals suffer for days as they slowly suffocate and starve.

That was the fate that awaited this scrub jay, except a young boy saw him stuck to the glue trap and tossed in the garbage by someone who must have thought he was dead. The young boy brought the bird on the sticky tray to WildCare, heartbroken at the thought of what had happened to him.

Without exception, every person who has rushed to WildCare’s Wildlife Hospital with an animal stuck in a glue trap that they set has expressed deep regret. Each person says that, had they known how intensely the trapped animal would suffer, no matter how despised that animal may be, they never would have used the product.

Please use the buttons at the top of the page to share this story with friends to prevent them from every purchasing a glue trap, and scroll down for a letter to send to local hardware stores and merchants, asking them to not carry glue traps on their shelves!

What do you do if you find an animal stuck to a glue trap?

NEVER try to remove the animal on your own. Bring him immediately to WildCare or your local wildlife care center. Call our Hotline for support 415-456-7283. Keep the animal in a dark box (with air holes) to reduce his vision and stress levels and stop his frantic attempts to escape. Never cut feathers, skin or limbs, and do not use oil to try to remove the sticky substance.

In the Wildlife Hospital

Once this Western Scrub Jay was in the Wildlife Hospital, WildCare Medical Staff did a visual check of the bird's situation and quickly decided that he would need to be sedated to be removed from the glue trap. With the bird safely anesthetized, they could begin to remove him from the horrible sticky stuff.

Watch the videos below to see how hard it is to remove a living animal from one of these horrific traps. When snipping away the glue, Medical Staff is careful to not cut primary feathers, which would require a long time in care to grow back.

The bird's left leg was hidden under his body, completely stuck in the glue, and Medical Staff worried that the bird might have dislocated or broken the limb. In the video below you can see them uncovering the leg, fortunately finding it uninjured.

With the bird finally free, Medical Staff used a soy-based paint stripper to clean his feet and feathers. Finding a product that will remove horrible sticky stuff like the glue on glue traps but that won't poison our patients through skin absorption or ingesting when preening is always a challenge, and this product seems to have some promise. It's water-based, not oily, which is also important. Using oil on a bird will ruin his feathers' waterproofing ability (think oiled birds!) and prevent him from thermoregulating (controlling his own body temperature) and from flying.

It was important to get all of the glue off of the bird so, over the next few days, he needed additional treatments to remove all the glue. That first night, though, everyone was thrilled to see the bird showing some feisty attitude despite his ordeal. He even bit our Medical Staffer's hand as she placed him in the incubator!

Over the next week, the scrub jay made a splendid recovery. With his primary feathers intact, he proved himself waterproof in one of WildCare's outdoor aviaries during the rain of the past week, and with a strong appetite and an attitude to match, it was a surprisingly short time before the bird was ready to return to his home territory in the wild.

After confirming that all glue traps had been removed from the location where he was found, and receiving assurances that no other glue traps would be set, we returned the bird to his home yesterday. Watch him fly free in the video below.

Help Us Stop the Use of Glue Traps!

Knowing this Western Scrub Jay's story and understanding the truly horrific nature of glue traps, we know none of our readers will ever use a glue trap. But your neighborhood hardware store still probably carries glue traps on its shelves, and many people will continue to see the cute advertising and the "safe and nontoxic" message and put glue traps out to inflict more suffering on animals.

People don't think about the consequences of putting out a glue trap, or how the trapped animals will actually die.

We can make a difference! This letter, including a page of photos from the Wildlife Hospital and a page of humane alternatives to using glue traps and poison to control rodents, is being mailed to hardware stores throughout Marin County, and we're asking our readers to send or bring the letter to your own neighborhood hardware or garden store. Drug stores also sometimes sell glue traps. Click here for the printable PDF of the letter.

Click here for the text of the letter to put into your own Word document.

Glue traps are NOT humane. They are NOT safe, and they should NOT be sold in stores.

People put out glue traps because they see rodents and want them gone. Rodents inside the home should be evicted and excluded, but remember that rodents outside are part of the natural environment. Traps of any variety should never be placed outside.

The best method of rodent control is prevention. Rodents tend to set up camp in our homes when food and space are made available to them. How can you get rid of them?

Remove potential rodent homes like yard debris, trash, construction waste, etc. Rodents also thrive in groundcover like ivy, so removing ivy from the yard, especially around the house, is a good solution too.

Eliminate food sources. Keep bulk food, seed, and dry pet food in metal cans with secure lids. Pick up fallen fruit. Sweep under birdfeeders and take them inside at night.

Exclude rodents from your home. Seal openings 1/4 inch or larger around the outside of your house with metal, concrete, or Stuf-fit Copper Mesh Wool, which can be found online or at hardware stores. If you would like humane, professional assistance with rodent exclusion, contact our WildCare Solutions service at 415-453-1000 x23.

Include natural rodent predators in your solution. A family of five owls can consume up to 3000 rodents in breeding season. Placing a nest box to encourage a family of owls to make your property home can be a great alternative to commercial pest control methods. Please visit The Hungry Owl Project website for more information.

If you exhaust all the above efforts and as a last resort decide that lethal control of rodents is necessary, please use a rat zapper or snap traps (but only for inside use).