Newborn Fawns Orphaned When Their Mother Is Hit by a Car 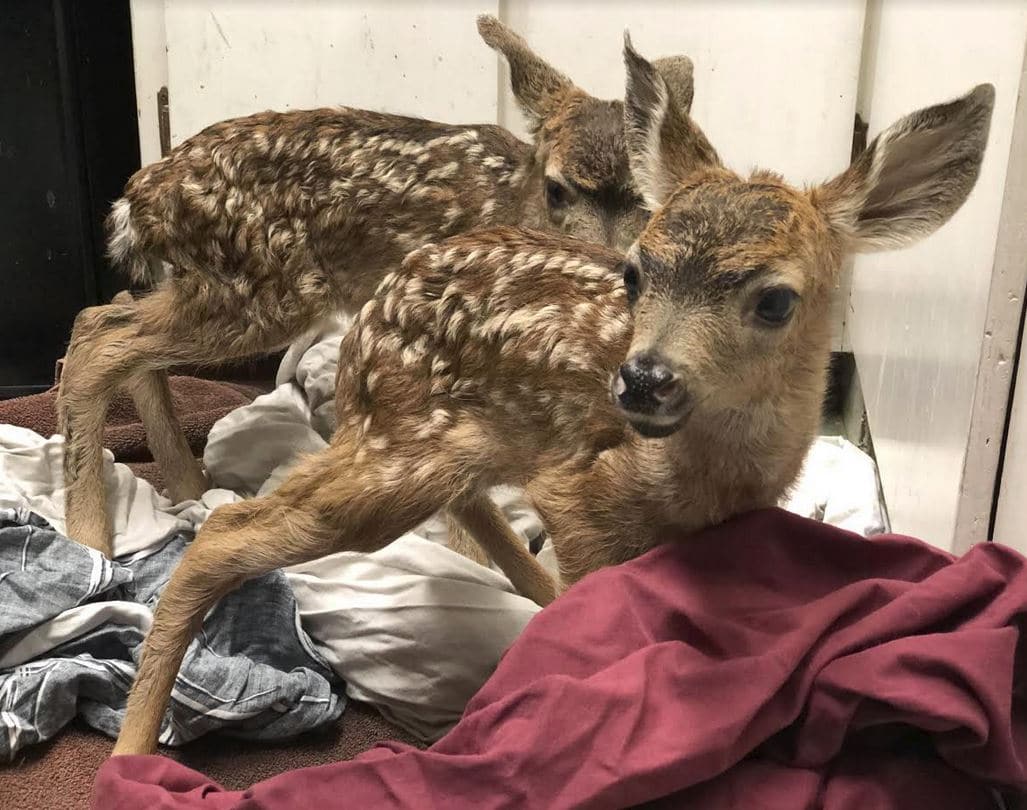 Two tiny newborn fawns arrived at WildCare’s Wildlife Hospital from near the Nicasio Reservoir in West Marin, transported by Marin Humane officers called to the scene.

A car struck and killed their mother, and these wobbly-legged fawns, so young their umbilici are still wet, were left as orphans.

Christina Milne was driving to a class when she saw the pickup truck that had hit the mother deer parked on the side of the road with its flashers on. The driver was waving, and when Christina turned around to see what had happened, the man told her he’d accidentally hit and killed a deer, but that there were two babies that were still alive!

The fawns were right on the side of the busy road with nothing to protect them. Christina asked the man if he had a sweatshirt or blanket, and she went back to her vehicle to grab her own sweatshirt. Together they gently lifted and wrapped the fawns as they discussed how to get them the help they needed. 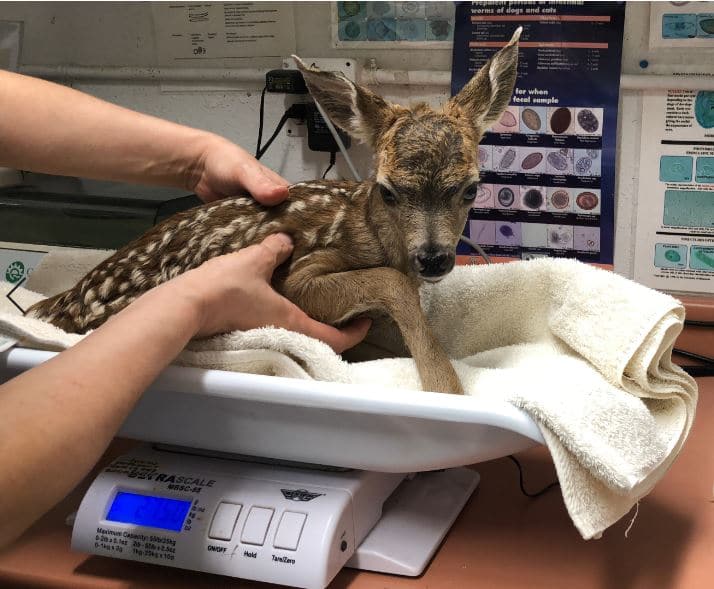 Another car had stopped and Christina asked the two young ladies in it to get to an area with cell phone reception and call WildCare. Another man also stopped on his way to Olema in West Marin, and Christina asked him to stop at the fire station and tell the sheriff that she was parked on the side of the road near Nicasio Reservoir with two newborn fawns.

That message must have gotten through, because a sheriff arrived, followed not long after by the Marin Humane officers. Christina estimates she spent about an hour sitting in her car with the fawns as she waited for help.

The Marin Humane officers knew that the fawns were in desperate need of care, so they rushed them to WildCare’s Wildlife Hospital in San Rafael.

WildCare’s veterinary team immediately went into action to help the tiny fawns adjust to their new life as orphans.

Each baby was given a full-body exam to check for injuries, of which none were found. The fawns were weighed, and, to counteract shock, the babies received subcutaneous fluids and were wrapped in warm blankets.

WildCare’s medical team filled a bottle with an electrolyte solution designed specifically for fawns, but apparently it doesn’t taste very good, as both babies shook their heads and squirmed rather than suckling. After a period of quiet rest, Medical Staff offered the bottle again, with more success (see video below).

Because fawns have a high risk of imprinting on humans and they require a lot of space to grow up healthy, WildCare partners with Fawn Rescue, an organization based in Sonoma that specializes in the care of orphaned Black-tailed Deer fawns. These two orphans will be transported to Fawn Rescue as soon as possible, where they will grow up in the company of other fawns, and will return to the wild as soon as they’re old enough.

WildCare asks everyone to be aware that fawns and other wildlife babies are here!

Please be extra careful when driving, and watch for animals crossing the road. Any mother animal killed by a car likely has babies that will die without her. If you see injured wildlife of any species, or if you see a fawn or other baby animal that you think might be orphaned, always call WildCare’s Hotline at 415-456-7283.