In the video above you can see the mother opossum foraging for food with her whole family, including the two white siblings
on board! You can tell that all those babies are heavy, and keep an eye out for the little one who is half in and half out of
the pouch as mom tries to walk! Video by Melanie Piazza

Our mother opossum’s babies were approximately this size upon intake at WildCare.

When this mother opossum arrived at WildCare’s Wildlife Hospital, her babies were about the size of jelly beans. The photo to the right shows their approximate level of development on intake. At that point, we never could have guessed that two of the nine babies would grow up to have a rare and beautiful white color variation called leucism!

Virginia Opossums are North America’s only marsupials, and, like kangaroos and koalas in Australia, their young are born extremely under-developed with only vestigial back legs, ears, and eyes, and no fur.

Several weeks later, the joeys are much larger and have fur! Mom continues to keep them safe in her marsupium. Photo by Alison Hermance

The baby opossums leave the uterus and make their way up the mother’s belly to her marsupium (or pouch), where each baby latches onto one of 13 nipples by swallowing it. The young opossums complete their development in the marsupium, eventually venturing out of the pouch for longer and longer periods as their eyes open, their reflexes develop, and their curiosity expands.

Once he leaves the pouch, a baby opossum’s survival depends on his ability to cling to mom’s back and fur as she wanders her territory in search of food. At WildCare we jokingly refer to baby opossums as “nature’s Velcro” because their little feet are so incredibly good at gripping. If a young opossum falls off mom’s back and doesn’t get back to her, he’s on his own to make his way in the world. This is the opossum’s natural dispersal strategy, and it is very successful. 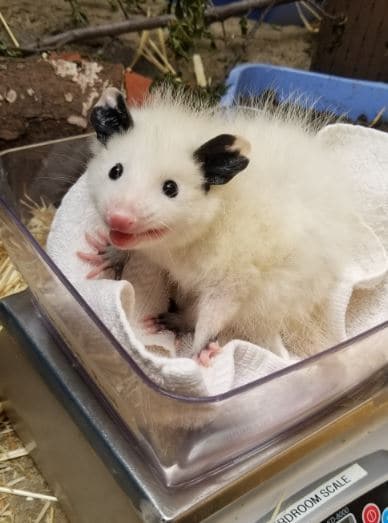 One of the white babies is a male, the other is a female. Here’s the little male. Photo by Melanie Piazza.

The mother opossum was probably hit by a car. She arrived at the Wildlife Hospital with head trauma and a fractured jaw, typical injuries from a car accident. Medical Staff had concerns about the mother’s vision and the healing fracture, so they decided to keep her in care while she raised her young.

Clinic volunteers set her up with a cozy enclosure and a warm place to sleep. Over the next weeks, they also provided regular servings of a delicious omnivorous diet (who doesn’t like fish, mice, egg, grapes, and fruit-flavored yogurt all mixed together?), and gave her lots of space to relax and heal. Weekly checks of the opossum’s marsupium showed that the babies were developing normally. 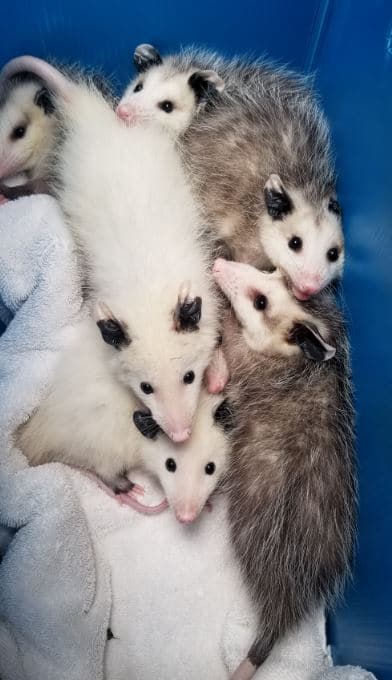 A good view of the different coloration on the leucistic babies. Photo by Melanie Piazza

Interestingly, the mother opossum’s pouch runs vertically up her abdomen (not horizontally as we saw in Disney movies!), and it is controlled by strong muscles that allow her to tightly close it if she senses danger. Quick glimpses of the growing babies were all we got until they were old enough to emerge from the pouch on their own.

Once they did, we were so surprised to see that two of this opossum’s babies were bright white! As mentioned above, these babies have leucistic coloring. Leucism is is a condition in which there is partial loss of pigmentation in an animal resulting in white, pale, or patchy coloration of the skin and hair, but not the eyes. This is different from albinism, in which the body does not produce enough melanin. An albino opossum would have pink eyes and ears.

Baby opossums in a row on Mom’s back. Photo by Melanie Piazza

This is a genetic variation that shows up occasionally, and there is a known population of white opossums in the East Bay city of Alameda, which is where this mother opossum was rescued. Leucism is generally a recessive genetic trait, which means both this mother opossum and her mate had the genes responsible for these babies’ unusual and striking coloration.

A Mother of Multiples

As the babies grew too large for the pouch, we really started to develop an appreciation for the challenges of being a mother opossum!

Baby opossums basically treat their mother like an ambulatory jungle gym. As she wanders her territory searching for food, the babies ride on her back. Or her side. Or her head. If they’re hungry, the baby opossums might nip back into the pouch for some milk. Or they might clamber down and see what Mom is having for breakfast.

The video above was taken with a trail camera set up in the opossum family’s enclosure. You can see how the young
(and very plump!) baby opossums take the opportunity to explore on their own, but how they then go scurrying
back to mom’s back. You can also see her obvious impatience with the one that insists on riding on her head!

This mother opossum has nine healthy babies, all of whom use all four feet to grip her fur and cling to her body. They’re curious little things, so sometimes they will leave her to explore a bit, but they will express their anxiety about being away from her with loud “ch ch ch” calls, and they’ll run and climb back onto her shoulders every few minutes.

As the babies get older, you can see what a heavy lift this becomes!

These young opossums have grown up healthy and thriving at WildCare, and we look forward to being able to release them back to the wild very soon.

We at WildCare are awed every day by the work done by mothers of every species, and we wish all moms, human, wild, domestic and everything in between a very happy Mother’s Day!

[well] Help wildlife babies like these grow up strong and healthy! Click to donate to WildCare now! [/well]

When they’re not wandering around searching for food, the opossum family relaxes in a cozy heap! The youngster in
this video is enjoying a satisfying ear scratch, while one of his siblings considers changing his placement in the pile-up.
Video by Melanie Piazza

“Gotta get back to Mom!” It’s fun to play with your brother, but real happiness is riding on Mom’s back!

In the video above, the young opossums are being weighed, checked and microchipped by WildCare Medical Staff.
It’s challenging to keep two rambunctious young opossums on the medical exam table!