This video of the turkey in her brother’s room was taken by Britney Parnell as she waited for Marin Humane
to arrive to transport the turkey to WildCare. 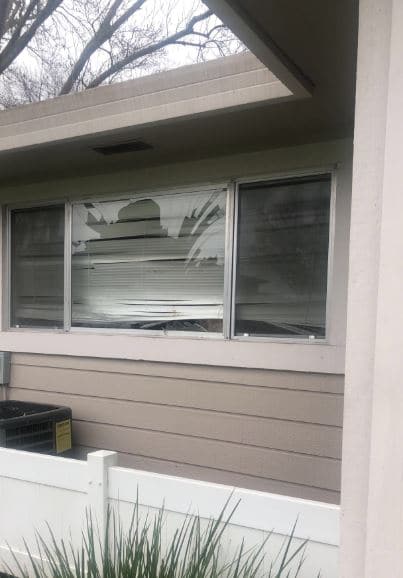 The turkey crashed right through the window! Photo by Britney Parnell

By all accounts it sounds like an explosion when a bird this big breaks through a plate glass window!

Every couple of years that we admit a “plate glass turkey”…  in fact, a few years ago a trio of turkeys crashed through the large glass window of a middle school cafeteria!

This bird is a healthy, full-grown male Wild Turkey. Something startled him into flight, possibly a dog or car. He may have been aiming to land on the roof of the house and didn’t have enough lift to clear the house or he saw the reflection of sky and trees in the window, and thought he had more space to fly. Either way, he crashed through the window, landing in a young man’s bedroom.

Luckily for the turkey, the family was home at the time and came running to see what the commotion was. Shocked at this unexpected house guest, who was himself panicked and further injuring himself trying to escape the foreign interior of the bedroom, the family immediately locked the bird inside the room and called Marin Humane. Marin Humane Officer Ruth Darlington arrived promptly and was able to successful capture the turkey for transport to WildCare.

As you can imagine, the bird’s head and neck were riddled with lacerations and embedded glass and he was bleeding profusely. The room he left behind was also a bloody mess.

Even during WildCare’s “slow” season the hospital can be a very busy place, especially in our small medical room which houses a single exam table and anesthesia machine.

When Officer Darlington arrived with the bloody turkey, our veterinarian Dr. Sorem had a Black-crowned Night Heron on the exam table removing a surgical pin from a healed femur fracture, while our Clinic Manager, Brittany, monitored that bird’s anesthesia, and our Director of Animal Care, Melanie, was intently working to revive a hypothermic crow who had been found stuck in a fence.

While all three patients were critical, the panting, bleeding turkey jumped to the front of the line, but his size and strength required multiple hands on deck. Our Songbird Hospital Manager, Lucy, was recruited to take over the care of the crow while Dr. Sorem completed her procedure, monitoring the heron in our oxygen incubator as he woke up.

Melanie and Brittany were freed up to get a weight on the turkey to allow them to dose and administer sedatives, which is not an easy thing to do with a 13-pound adult wild tom! 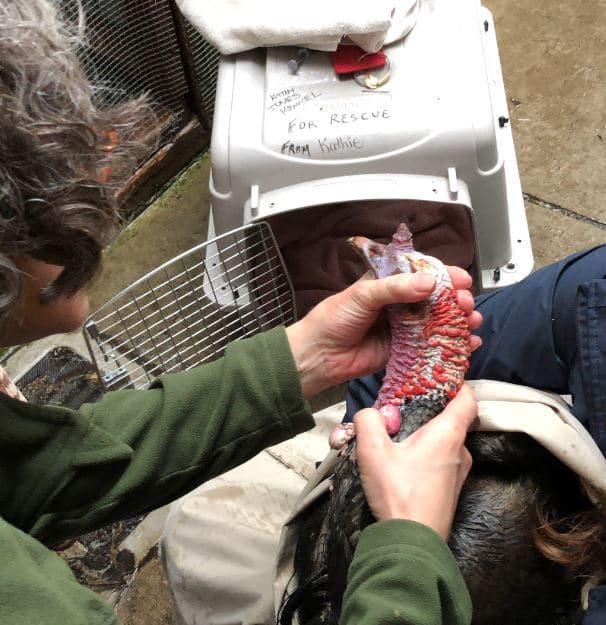 WildCare’s Veterinarian Dr. Sorem checks the suture sites on the turkey’s neck prior to release. Photo by Alison Hermance

As soon as the turkey was under anesthesia he was put on IV fluids. Dr. Sorem worked to clamp the most serious bleeders, and Brittany and Melanie located additional multiple lacerations hidden in the folds of his wattle, flushing out glass and feathers. Once clean, the wounds were sutured closed.

The bird also had what we call “bumper wounds,” raw patches of skin on his “wrists” where his wings had banged into the walls during his attempts to escape the bedroom. These were also cleaned and closed. Miraculously his eyes were not damaged, no other wounds were found, and radiographs revealed that he had not suffered any fractures. He was bathed to remove all the blood that had soaked into his beard and feathers, medicated and taken off the anesthesia.

Simultaneously, while his emergency medical care was happening, our team of volunteers had set up an outdoor enclosure for his recovery. Wild adult turkeys are notoriously difficult to keep in a wildlife hospital as they are incredibly high stress and, as we’ve mentioned, very strong! Once healthy enough, these large birds will further injure themselves, or the humans providing care, trying to escape.

In anticipation of this, the turkey was given long-lasting antibiotics and long-lasting pain medications so that we would not have to attempt to capture him twice a day to treat him if we had to keep him long-term. However, our real hope was that he could be released the next day.

Based on previous experience with “plate glass turkeys,” we were not surprised when the very next morning, despite what he had suffered the day before, our turkey was pacing his cage, flinging himself at the walls in his attempts to escape. Before he could further injure himself he was captured, given a quick final exam to be sure his sutures (which will dissolve over time as the wounds heal) were holding, and he was driven back to his territory and released.

(On a happy side note, the hypothermic crow made a full recovery and was also released the following day, and our Black-crowned Night Heron is expected to be released next week!)

In the video above, WildCare’s veterinarian checks the turkey’s neck and suture sites before release. The sutures will
dissolve over time as the wounds heal.

You’re free to go! We drove the turkey back to his home territory for release. We wish him well!

Wild Turkeys are becoming an increasingly common sight in the San Francisco Bay Area. Although not native to our region, they thrive in the mild climate around the Bay. With few natural predators and lots of food options, turkeys do well here.

Most of the time turkeys just make for a fun wildlife sighting in a nearby field, but these large birds can occasionally make nuisances of themselves. How can you live well with the turkeys in your neighborhood?

1. Don’t feed them. Although it might be tempting to feed the turkeys in your yard, your neighbors may not agree. Turkeys are happy to take advantage of a hand-out, and a source of food will encourage them to stay nearby. Never feed turkeys (or any wildlife!) to prevent them from becoming accustomed to humans providing food, and to keep them moving on through the neighborhood.

2. Show them who’s boss. Turkeys are flock birds, and they have a hierarchical social structure. This means they respond well to displays of dominance including (for humans) shouting, hand-waving and stomping. Opening and closing an umbrella at turkeys will also daunt them. Turkeys are generally shy birds who will move on if shown that someone (you!) has control of this patch of land. Don’t get too close, however. The spurs on the back of a turkey’s legs can cause injury.

3. Make roosting on your roof and exploring your garden unpleasant. One of the best ways to deter turkeys is to use the Scarecrow sprinkler, a sprinkler with a motion detector that shoots a heart-stopping spray of water when it detects movement. A Scarecrow sprinkler placed on the roof will quickly move roosting turkeys along, and strategically-placed Scarecrow sprinklers will prevent turkeys from invading the garden.

4. Drive safely. Turkeys notoriously don’t watch out for cars, so you’ll need to watch out for them. Especially during spring’s mating season, male turkeys (toms) will be strutting through neighborhoods in search of females. They may see their reflections in windows or in the chrome on your vehicle, and think it’s another turkey invading the territory. Covering reflective surfaces temporarily will usually be enough to encourage an amorous tom to move along.