Rattlesnake Stuck to a Glue Trap

This rattlesnake got stuck on a glue trap and would have died a slow and painful death if he hadn’t been rescued.

NEVER use glue traps! They are indiscriminate killers and every animal stuck to one dies slowly and in agony.

This video shows the snake’s intake in the Wildlife Hospital. Handle with care! The loud buzzing sound in the video is the snake shaking his rattle– the only part of him that wasn’t glued to the trap.

After sedating the rattlesnake, our team begins the painstaking process of removing him from the glue trap.

In the video above Melanie, WildCare’s Director of Animal Care talks about how they are working to set him free. These traps are incredibly cruel and should never be used.

This video gives a close-up of how the team released the sedated rattlesnake’s head and jaw from the incredibly sticky glue.

Animals stuck to glue traps die slowly from thirst and hunger… there is nothing on the trap to kill the animal except immobility. We are so glad this snake was rescued!

After more than half an hour of careful work, the team successfully removes the snake from the glue trap.

Fortunately the snake was rescued early enough that he suffered no major injuries, and his level of dehydration was easily improved with a day of care and recovery.

We released this snake back to his territory the day after his admission. 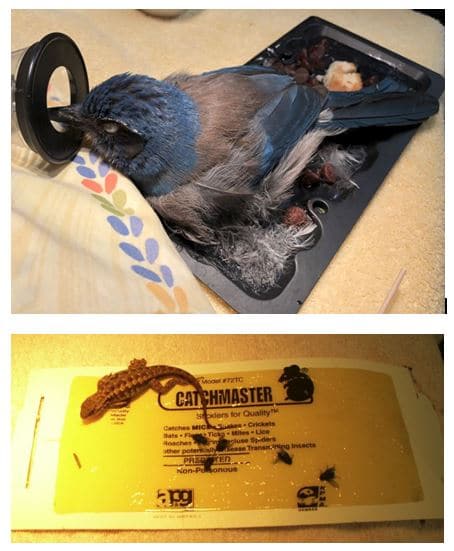 WildCare’s Wildlife Hospital admits over 3,500 ill, injured and orphaned wild animal patients every year. Of these, a dozen or more, including this rattlesnake, are brought to our San Rafael clinic stuck to glue traps.

Glue traps are one of the most cruel and inhumane pest control products on the market. They should never be used, under any circumstance, for any reason.

They may be inexpensive, and their cheerful packaging proclaims these traps to be “safe,” “clean” and “non-toxic,” but actually nothing could be further from the truth.

The fact is, when you set a glue trap, the trap itself doesn’t kill the animal. The glue is non-toxic, and it doesn’t end the animal’s life. Instead, animals stuck to glue traps must wait to die, slowly, of dehydration, starvation and exposure.

Many of the glue-trapped patients admitted to WildCare are rodents, the intended targets, but other animals also fall victim. Most people are appalled when they see what happens to an animal stuck to a glue trap, and no matter how much they may despise the animal they intended to trap, many people bring glue-trapped rodents (and other animals) to the Wildlife Hospital expressing deep regret and horror at the realities of how glue traps work.

This Northern Pacific Rattlesnake was likely pursuing rodent prey when he got stuck on the large glue trap. Soon, due to his struggling and twisting, every inch of this snake’s body was firmly stuck to the trap except his rattle. In the videos above, you can see how WildCare’s Medical Team sedated and then gently released the snake from the glue.

This rattlesnake survived; many other animals are not as lucky.

NEVER use glue traps, and please share this information with anyone who does.

Help WildCare Advocate Against the Use of Glue Traps

Because glue traps are so inhumane, WildCare does ongoing advocacy to remove them from hardware store shelves.

If you feel comfortable doing so, please download this letter and send it or bring it to your local hardware or other store where glue traps are sold. The PDF includes:

1. The letter for the manager of the store requesting they remove glue traps from their shelves.

2. Photos of animals trapped on glue traps (not gory, but very compelling. All of these patients were rescued and survived.)

2. A document about how to control rodents humanely.

Click for the letter to bring or send to stores here!