This rattlesnake came to WildCare tangled in garden netting. Watch Medical Staff untangle him and
give him an antiseptic bath to start his path to healing. Remember these are trained professionals…
don’t try to handle a rattlesnake at home!

Right now is prime time to see snakes basking on rocks along beautiful hiking trails around the Bay Area. Of the many diverse species of native snakes in California, there is only one that is dangerous to humans— the venomous Northern Pacific Rattlesnake.

But humans are dangerous to these snakes too! WildCare admits several rattlesnakes a year, and the reptiles usually arrive tangled in garden netting. Our gardens and yards provide excellent habitat for the rats, mice, voles and other small mammals that rattlesnakes eat, but plastic netting in our gardens can be deadly to snakes of all species.

Rattlesnakes are actually shy animals that know their best interest lies in avoiding contact with humans, not biting them.

Rattlesnakes generate their venom from their own bodies, which means they have a limited amount available at any given moment. If a snake uses his venom to strike you, that means he may not have enough venom available to capture prey, or to defend himself against an attacker.

In most situations, a rattler will take any opportunity to slither away without striking once the threat (you!) backs off. These snakes share our environment, and they provide a real service to us by helping control rodent populations! If you meet one, WildCare encourages you to give it a wide berth and let it continue on its way.

In the Wildlife Hospital, handling these snakes can be especially dangerous, as the snakes feel themselves to be very threatened. 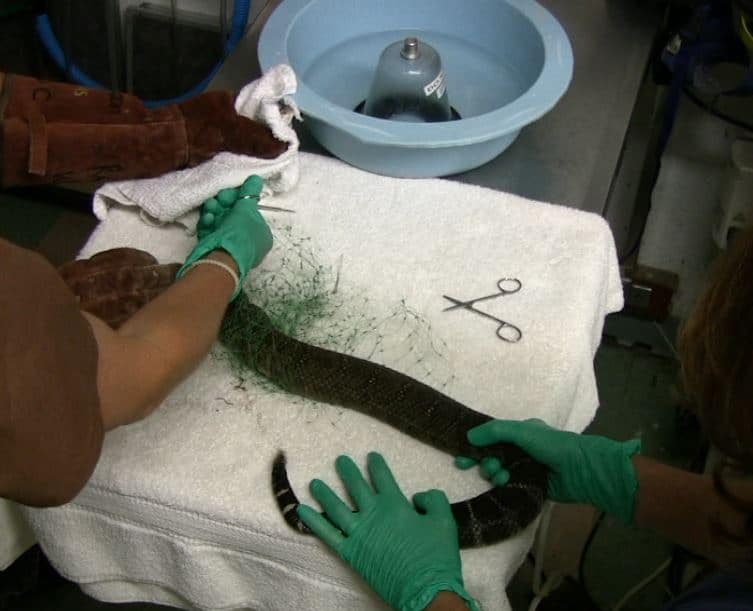 Garden netting is a terrible hazard for all wildlife, including snakes. Please don’t use netting, or if you must, roll the bottom up three inches and clip it securely to allow snakes to pass.

Most of the rattlesnakes admitted to WildCare’s Wildlife Hospital arrive tangled in garden netting.

Injuries caused by entanglement present in different ways on a snake than they do on mammals or birds. Because their scales are strong but also flexible, the netting doesn’t always break through them, so there often aren’t open wounds that need treatment the way there would be on another entangled animal. Instead most of the injuries on a snake are compression injuries, which are much harder to diagnose.

Examining an entangled snake, it is usually obvious where the material had compressed and squeezed the snake’s body, but it isn’t always clear how much damage to internal organs or deep tissue may have resulted.

The netting was tangled in this rattlesnake’s mouth! Fortunately it was easy to remove.

The rattlesnake in the video above arrived with netting entangled around his body and even in his mouth. Once the netting was removed, Medical Staff placed him in a warm antiseptic soak to prevent any possibility of infection. Then he was given a quick injection of anti-inflammatory medication and placed in a heavily locked reptile enclosure.

The only way to really ascertain the damage the snake had suffered is to wait until the snake sheds his skin. Once the top layer of skin is gone, wounds present and the snake’s true injuries become clear. Keeping a rattlesnake in a rehabilitation setting can be a challenge, but fortunately WildCare has volunteer Bob Flynn who built us specially-designed caging for patients like this one. The cage is escape-proof and lockable.

The snake was placed in this secure cage to rest and, in the next week or so, shed his skin. He was released back to his home territory a few days later.

So, how do we know it’s a rattlesnake? Well, the rattles are a good clue, but not always definitive for identifying a snake. Rattlesnakes’ rattles are made of keratin, just like their scales and our fingernails, and they are this pit viper’s helpful way of warning us that he’s dangerous. Rattlesnake babies are born with what is called a pre-button. The baby snake loses this piece when it sheds its skin for the first time. With the first shedding, the beginning of the snake’s rattle (called a button) appears. With every shedding another button, or rattle, will be added. The rattles are actually empty; the noise comes from the segments knocking together, so until a rattlesnake has two buttons, it can’t make a noise. Babies are born live and venomous, and are often more aggressive than the adults.

However, out in the wild, the sound of rattling can be imitated by other snakes taking advantage of the rattlesnake’s frightening reputation, so the rattling sounds aren’t a definitive way to identify a snake in the field.

The shape of the snake’s head is a better way to identify it. Look for a triangular head with vertical pupils in the eyes; non-venomous snakes have an oval or “thumb-shaped” head.

Pit vipers are so-called because they have a heat-sensitive organ called a “pit” between each eye and nostril which helps it accurately aim its strike at its warm-blooded prey. The dark-colored pit shows up clearly on the rattlesnake’s face, but you may not want to get close enough to see it. This rattlesnake got tangled in garden netting, no doubt as he was patrolling for mice, voles or rats to eat. Removing the netting was challenging, but this snake survived to be released back to the wild.

Rattlesnakes are common, and they help us by controlling rodent populations. A recent study of the Timber Rattlesnake demonstrated that these snakes indirectly help humankind by keeping Lyme disease (and other rodent-borne illnesses) in check. Rodents can carry Lyme-infected ticks, but those rodents eaten by rattlesnakes don’t have the opportunity to spread those ticks to humans. Click to read the article.

How to Avoid Being Bitten

First of all, stay alert. Rattlesnakes live among us in sunny rocky areas. They’ll usually warn you before they strike, but watch for them while hiking or gardening. We recommend protecting your lower leg area with boots, or closed shoes and long pants, when hiking or working in rocky, sun-exposed areas.

When hiking, remember to always STEP UP onto logs, rocks or other obstacles, rather than stepping over them. A rattlesnake you can’t see may be resting on the other side of the obstacle. Stepping up gives the snake some warning that you’re coming, and allows him the chance to slither away.

Finally, let snakes be! It is often the attempt to kill or chase off the snake that puts people at risk. If the animal is cornered and approached aggressively, he is more likely to bite in self defense. Most snakes will leave the scene and avoid confrontation if given the chance. Rattlesnakes are preyed upon by Kingsnakes, hawks and eagles. In turn, rattlesnakes feed on rodents, squirrels, rabbits and other small animals. Ground squirrels particularly dislike rattlesnakes, and have developed some interesting adaptations to drive them off, including harassment, dirt-kicking and biting, immunity to venom (in some cases), and a behavior called “tail-flagging,” in which the squirrel’s tail heats up to confuse the snake’s heat-sensing pit organs, and makes the snake think it has encountered a much larger animal. The squirrel knows the difference between a rattlesnake and other snakes, and saves its most aggressive confrontations for rattlers.