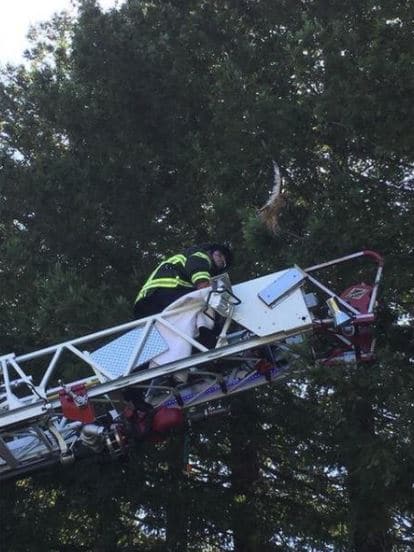 This Red-shouldered Hawk was in the tall trees overlooking a bank parking lot in the town of Novato, when suddenly his wing was caught by something. A thin line of monofilament line, like fishing line or the kind of kite string used by “fighting” kites, was stretched across the space between two of the trees in the bird’s home territory. It got tangled in the bird’s feathers, and before he knew what was happening, the bird was trapped, and dangling dangerously by one wing.

Fortunately, before he had been stuck too long, someone spotted the hawk and called for help. A Marin Humane officer was dispatched, but upon arriving at the scene Officer Nausin could clearly see that she couldn’t reach the bird on her own. She contacted the local fire department, the Novato Fire Protection District, and the firemen arrived, fully-equipped, with their truck and ladder to rescue the bird. 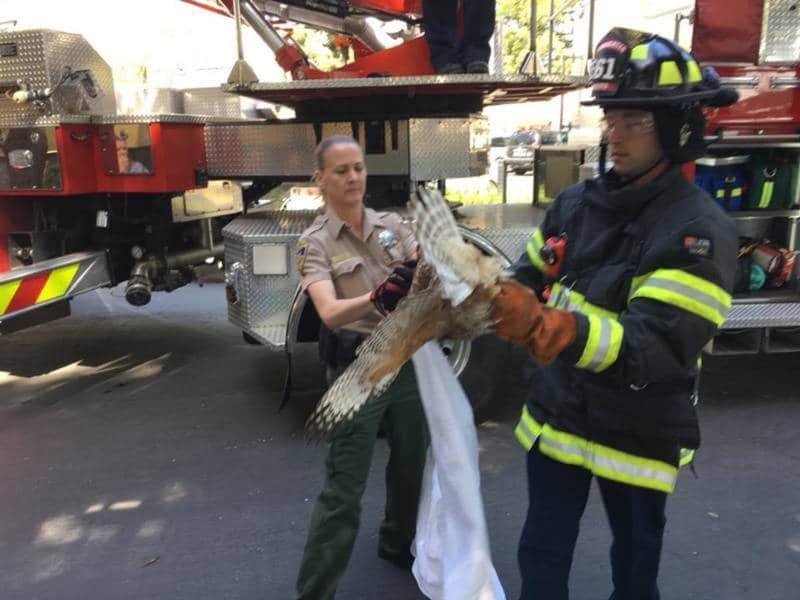 Red-shouldered Hawks aren’t calm birds, and this one was probably not at all pleased to see large “predators” climbing a ladder toward him. Fortunately the firefighter was able to dodge the bird’s talons and sharp beak, snip him free of the entangling line, and transport him to the ground where the Marin Humane officer was waiting to bring the hawk to WildCare’s Wildlife Hospital.

It’s wonderful how many people and organizations came together to help rescue this bird, and WildCare is so grateful to our partners at Marin Humane and the Novato Fire Protection District for rescuing this hawk!

Upon intake at WildCare, Medical Staff weighed the bird and then carefully examined his wing. We very frequently admit animals that have been tangled and dangling for hours or even days, and the effects of this can be heartbreaking. But this bird didn’t seem to have been tangled for too terribly long, and Medical Staff was pleased to see that the line was wrapped around feathers, rather than being embedded in the bird’s muscle or bone. Click here to become a Monthly Donor to WildCare and help us care for animals in need like this hawk! Your monthly gifts will be MATCHED for a year if you donate before May 15! 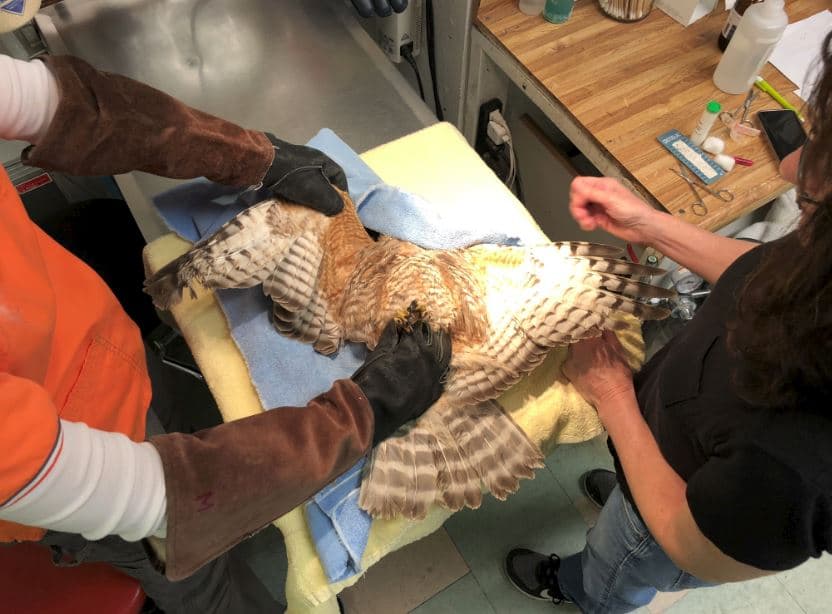 Removing the line was the first order of business. Once freed, the bird was examined for any fractures or dislocations. Nothing obvious was palpated, so the bird was taken outside to a small aviary and allowed to stand and stretch so that Medical Staff could observe his use of the wing. Unfortunately, the bird was unable to fly and his once-entwined wing was drooping low to the ground which could be a sign of dislocation, tendon, ligament and/or nerve damage— none of which would be a surprise. The  bird had been dangling from the one wing, which was supporting all of his body weight, struggling in the tree for an unknown amount of time.

Radiographs (x-rays) were taken for a closer look and thankfully there was no dislocation or fracture. Tendon, ligament or nerve damage would not show up on an x-ray, however, so the next step was to treat the bird with anti-inflammatory pain medications and provide supportive care while he healed.

Since there were no fractures, our biggest concern became the condition of the bird’s primary feathers (which you can see in the video at the top of the page). It may not look like much, but just that small amount of damage to these most important flight feathers would prevent any bird from being flighted, let alone able to hunt. We often marvel at how strong, yet how delicate birds are!

In the event that the feathers were not salvageable, medical staff began making plans to “imp” the birds feathers. Imping is a procedure where feathers from a deceased bird of the same species are attached to damaged feathers, allowing the recovering hawk to be released before his feathers molt and regrow. Waiting for an adult raptor to naturally molt out individual primaries would take a approximately a year in captivity! Due to the time of year, we assumed that this bird had a mate and possibly even a nest of young awaiting his return, so our priority was to get him released as soon as possible.

Over the next two days, Medical Staff continued to give the bird medication for pain and inflammation and cage rest. They also washed the damaged feathers to assist the bird in preening the feathers back into position. Thankfully the hawk was able to work his feathers back into their proper place and, when taken out to the flight aviary, he was able to fly with great agility, avoiding capture! No imping would be required and the bird could be release back home immediately.

WildCare staff released the hawk in a park within his home territory near the bank where he had been rescued on Thursday. Staffers from Marin Humane also joined to watch the bird fly free. He was last spotted flying back toward the bank, hopefully to return to caring for his mate and his young. Watch his release in the video below!

It isn’t just hawks and seabirds that get tangled in line! WildCare wants to make everyone aware of the dangers to wildlife of all types of string, twine, netting and line.

So many of the injuries to our wild patients are 100% preventable, and these injuries are no exception. Please follow these tips to help keep wildlife safe from the risk of entanglement: