In this video Dr. Sorem gives the turkey medications for pain, inflammation and infection. 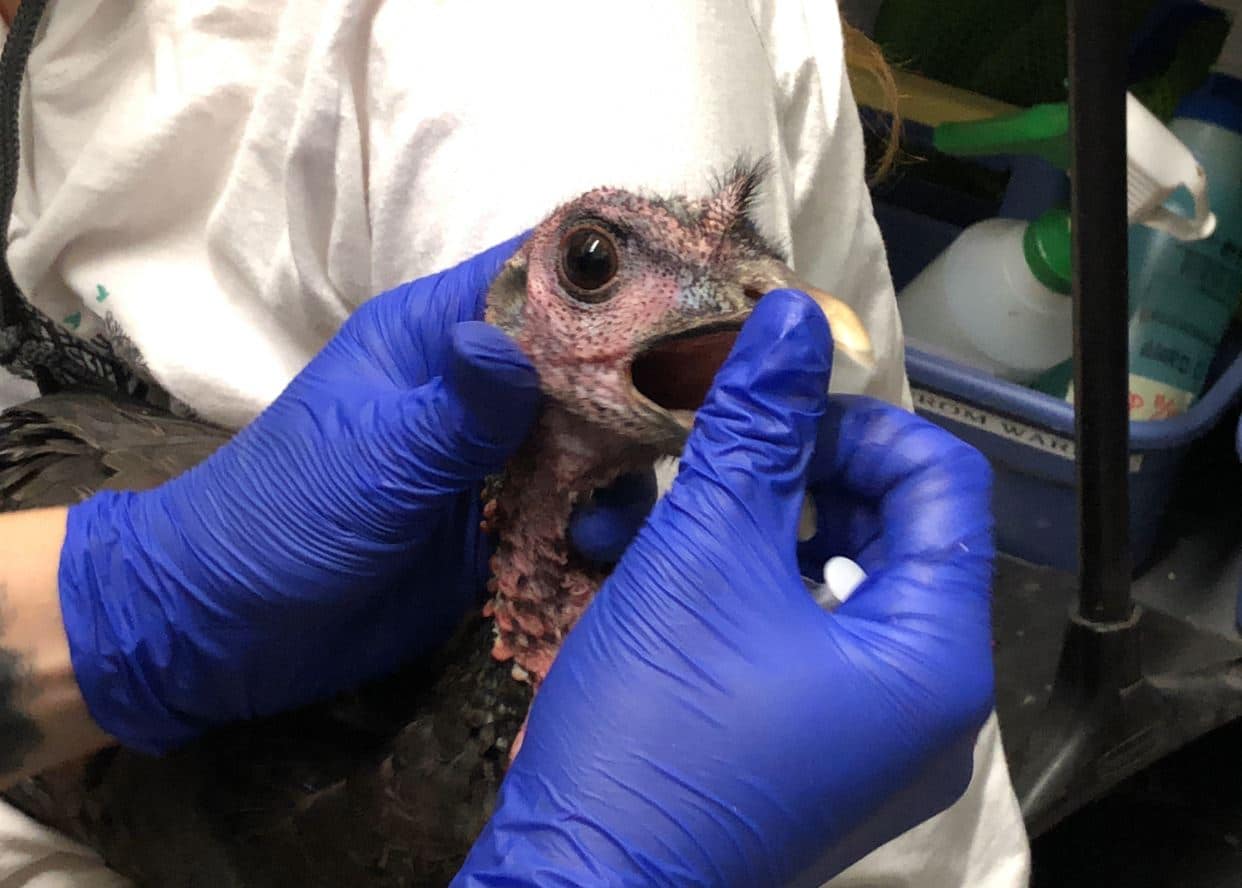 The vast majority of the animal patients brought to WildCare’s Wildlife Hospital arrive as a direct result of negative interactions with humans, our pets, or our things (like cars, fishing line etc.)

This juvenile Wild Turkey got her leg stuck in a fence! She may have been escaping a predator, or just keeping up with her flock-mates when her leg got trapped. Unable to escape, the bird was held fast until the property owner saw her and called our partner organization, Marin Humane, for help.

The Marin Humane officer arrived at the Novato home and was able to free the struggling turkey from the fence. The bird was unable to stand, which is not uncommon in this situation, and her leg was severely abraded and bleeding profusely. The officer rushed the turkey to WildCare. 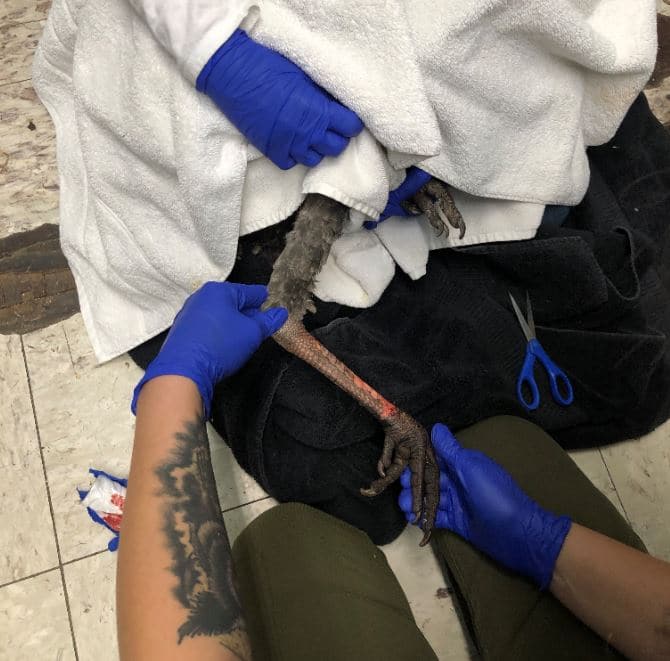 Upon intake, WildCare’s Medical Staff’s first priority was to stop the bleeding.

Pressure wraps were insufficient on their own, so they applied emergency sutures (six of them), and yet another pressure wrap. They gave the bird fluids, and medication for pain, and allowed her to rest in a dark oxygen incubator for some time.

Because stress is so dangerous to our wildlife patients, our team must strike a delicate balance between the need to perform a physical exam on a new patient to determine the best course of care as soon as possible, versus the impact of the stress and trauma the animal has undergone prior to arriving, and once at, the Wildlife Hospital.

In this case, allowing the turkey to rest and recover before doing the exam was the right choice. Once the turkey was stable and had regained some strength, Medical Staff completed the intake exam and administered further care. This included more wound cleaning and dressings, radiographs (x-rays), and antibiotics, Then they set her up in an indoor enclosure with food and water.

Turkeys are incredibly strong animals, so our Medical Team has their work cut out for them to prevent the bird from reopening her wounds as they capture and restrain her twice a day for medications and wound treatments

As of this writing, the turkey is able to stand on her own. She is able to walk a little bit, the foot is warm, and she can move her toes, but the appendage is more swollen and discolored than we would like. While her prognosis is guarded, we will do everything we can to get her back to her flock as soon as possible. 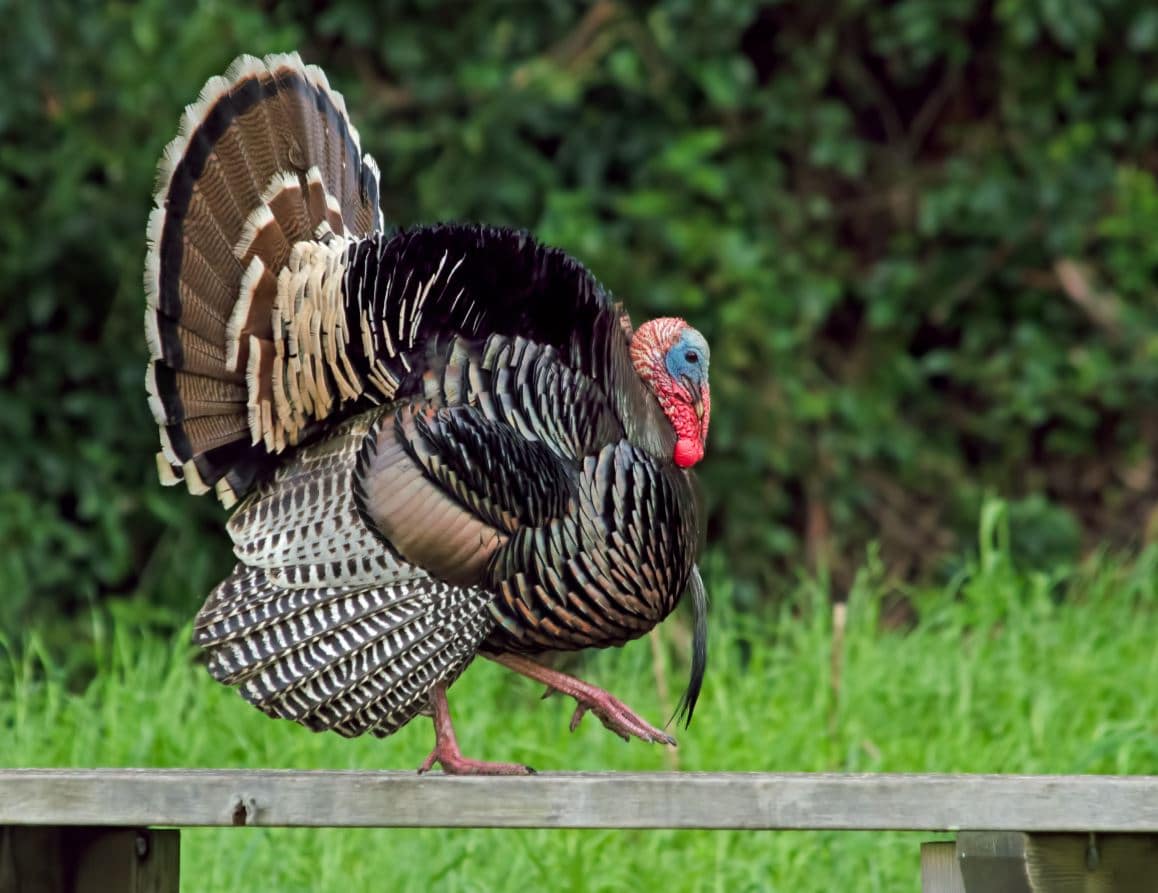 Wild Turkeys are becoming an increasingly common sight in the San Francisco Bay Area. Although not native to our region, these large birds are native to California and they thrive in the mild climate around the Bay.

With few natural predators and lots of food options, turkeys do well here.

Most of the time turkeys just make for a fun wildlife sighting in a nearby field, but these large birds can occasionally make nuisances of themselves. How can you live well with the turkeys in your neighborhood?

1. Don’t feed them. Although it might be tempting to feed the turkeys in your yard, your neighbors may not agree. Turkeys are happy to take advantage of a hand-out, and a source of food will encourage them to stay nearby. Never feed turkeys (or any wildlife!) to prevent them from becoming accustomed to humans providing food, and to keep them moving on through the neighborhood.

2. Show them who’s boss. Turkeys are flock birds, and they have a hierarchical social structure. This means they respond well to displays of dominance including (for humans) shouting, hand-waving and stomping. Opening and closing an umbrella at turkeys will also daunt them. Turkeys are generally shy birds who will move on if shown that someone (you!) has control of this patch of land. Please don’t throw anything at the birds, as that can cause injury, and don’t get too close. The spurs on the back of a turkey’s legs can cause injury. 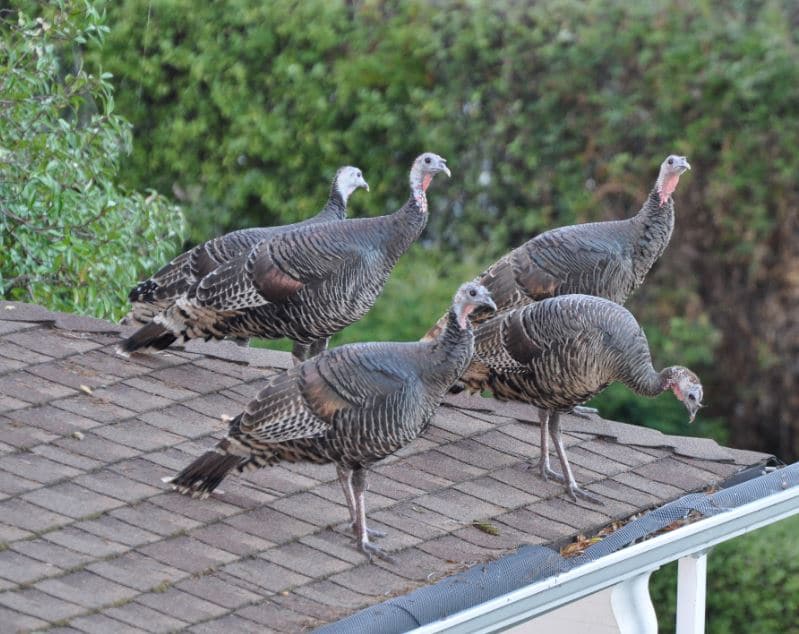 Turkeys on the roof. Photo by Chris Coughlin

3. Make roosting on your roof and exploring your garden unpleasant. One of the best ways to deter turkeys is to use the Scarecrow sprinkler, a sprinkler with a motion detector that shoots a heart-stopping spray of water when it detects movement. A Scarecrow sprinkler placed on the roof will quickly move roosting turkeys along, and strategically-placed Scarecrow sprinklers will prevent turkeys from invading the garden.

4. Drive safely. Turkeys notoriously don’t watch out for cars, so you’ll need to watch out for them. Especially during spring’s mating season, male turkeys (toms) will be strutting through neighborhoods in search of females. They may see their reflections in windows or in the chrome on your vehicle, and think it’s another turkey invading the territory. Covering reflective surfaces temporarily will usually be enough to encourage an amorous tom to move along.