Click here to learn how to tell if a fawn needs help!

When someone calls WildCare’s Hotline (415-456-7283) and says they have a fawn in distress, one of our first questions is whether the young deer still has a fawn’s spots. WildCare treats fawns, but, per Fish and Wildlife regulations, we are not permitted to treat adult deer because of the dangers to both animals and humans from attempting to contain them. 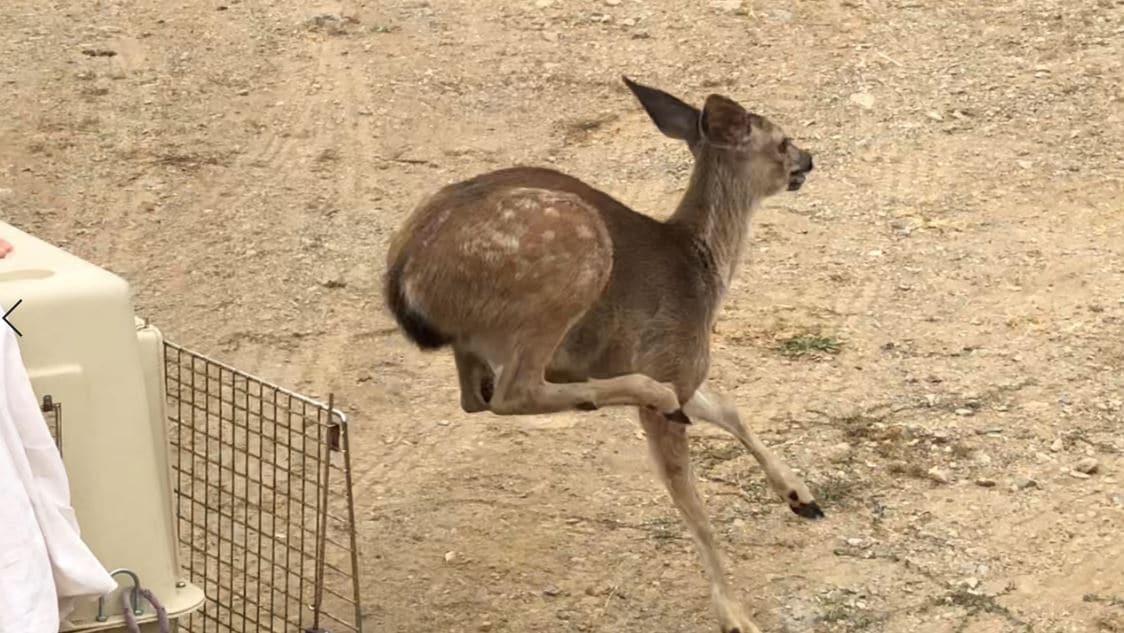 You can see the few remaining spots on this juvenile deer’s coat as he’s released. Photo by Alison Hermance

The rescuers who saw this young deer swimming in the lagoon in the middle of Seadrift at Stinson Beach knew the animal was in trouble, and with great effort they managed to pull him out of the water and onto their dock. The deer was barely conscious, he was vomiting copious amounts of sea water, and he was shivering from hypothermia.

In a stroke of genius, the rescuers heated blankets in their clothes dryer and wrapped them around him as they called for help.

Another way that our Hotline operators can discern if an injured deer is of an appropriate age to be treated at WildCare is whether or not the rescuer can physically pick up the animal and if the deer fits into a box or carrier to be safely transported.

The rescuers live at Seadrift, where the security kiosk attendants occasionally have the opportunity to rescue marine mammals, so they actually had a jumbo-sized animal carrier available as well as a truck! So when our Hotline Operator asked if they could bring the fawn to us, they said no problem!

WildCare staff was shocked when the massive kennel arrived with a very large “teenage” deer! As you can see in the release photo, despite his age and size, the deer did in fact still have a few faded spots on his rump.

Fortunately he was semi-conscious on intake, and calm enough for Medical Staff to do an examination. They jumped into action to get as much done as possible before the deer awoke completely. He was put on oxygen, treated for hypothermia and salt water inhalation, given an injection of long-lasting antibiotics, and set up in his kennel with heat in an outdoor cage where it would be the most quiet.

Medical staff then had to figure out what to do next. Once he was awake and aware, the young deer became very active inside his large kennel, heaving his body against the sides trying to escape. A fawn this large can not be let loose inside our cages as he would seriously injure himself trying to escape when staff tried to recapture him. It was evident that he had full use of all legs and he had recovered from his ordeal. The decision was made to release him.

It took three Medical Staff members to sedate the deer for the drive back to his home territory. They loaded the bucking kennel into the back of a staffer’s SUV and immediately drove the deer to the open space near where he’d taken his swim (but away from the water) to be released. This fawn was so keyed up, he woke himself up about half way home so a reversal agent for the sedative was not needed. As you can see in the video, he bounded away immediately. 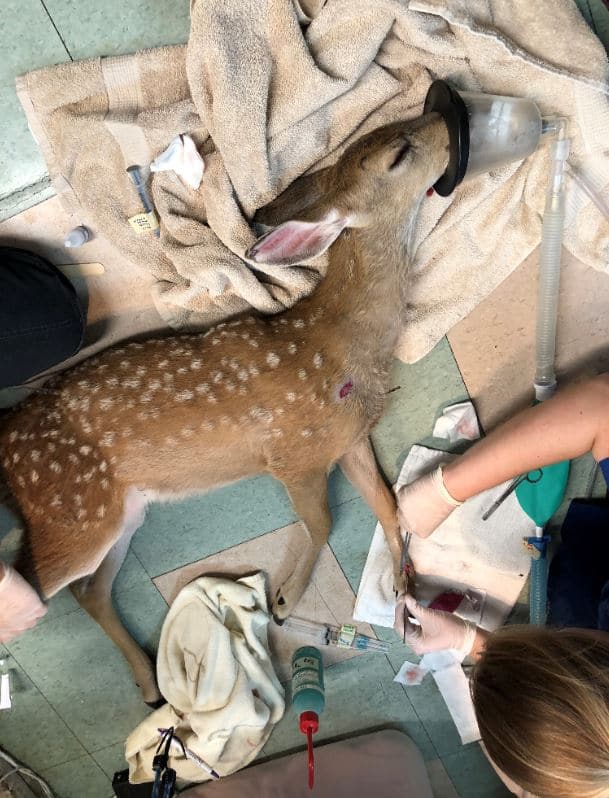 This large fawn was very healthy aside from a few cuts and scrapes. We were happy to be able to return her to her mother’s care after treating her wounds. Photo by Alison Hermance

Almost as soon as Medical Staff arrived back at the Wildlife Hospital from the first fawn release, a woman pulled up to WildCare’s front entrance with another fawn.

This fawn DID have spots, but she was still a big animal, weighing in at over 30 pounds! Apparently the rescuer had not hit the fawn with her car, the fawn had run into the vehicle, and she was mostly unconscious when the rescuer picked her up and placed her in the back seat of her car. The mother deer watched all of this from the roadside.

During the warm car ride from Novato to WildCare, the fawn began to regain consciousness. Flailing hooves in the back seat are pretty daunting, so the rescuer parked and ran to WildCare’s front desk to get help.

Medical Staff rushed to the car parked on the street in front of WildCare to assess the situation. As the fawn started to bash against the windows in her attempt to escape, our quick-thinking staff covered all the windows with large sheets to cut off the fawn’s view of perceived escape routes and to help her calm down. Senior Wildlife Technician Jacqueline Lewis bravely entered the back seat of the car to restrain the fawn, while other staff members stood behind with blankets cutting off the opportunity for the fawn to escape out the briefly open door.

As evidenced by her frantic escape attempts, Medical Staff knew they could not keep this fawn in captivity for long-term treatment, so they were hoping to be able to return the fawn right back to where mom was waiting for her. However, due to the blood in the back of the car, they knew that she needed a full evaluation first. The fawn was quickly anesthetized and evaluated. She was much too large for the medical table in our Medical Room, so the exam and treatment had to be done on the floor. The source of the blood was a long laceration on her front leg and various smaller wounds or “road rash.”

Medical Staff’s goal was to keep the fawn under anesthesia for as short a time period as possible. In the video below you can see Jacqueline suturing the laceration on the sedated fawn’s foreleg (with absorbable suture that will dissolve on its own as the wound heals), while at the same time while our Director of Animal Care cleans the more minor wounds and applies liquid bandage to allow them to heal free from flies or infection. The fawn was also given injections of long-lasting antibiotics and pain medication.

As the deer was being worked on, our Hotline Operator had called a Marin Humane officer to ask if he would be willing to transport the fawn back to her mother as soon as she had recovered from sedation. As luck would have it, an officer was in our area and heading back to Novato, so he agreed to transport the fawn for release.

While the whole event was intense for all of us, (the fawn included!) it all happened in about an hour from start to finish! Once the fawn was fully awake and stable, our largest animal carrier was just big enough to fit her, and the officer was able to transport her back to where she was found. He successfully released her back to her mother’s care.

Some lessons to be gleaned from our big day of big deer: spots do not make the fawn and please do not transport large fawns without proper containment!

Remember to always call WildCare’s Hotline 415-456-7283 if you see a fawn, or any animal, in distress, and huge thanks to the brave rescuers who saved these two fawns!

Donate today and your gift will be MATCHED!

Help WildCare always be ready to help animals like these deer!